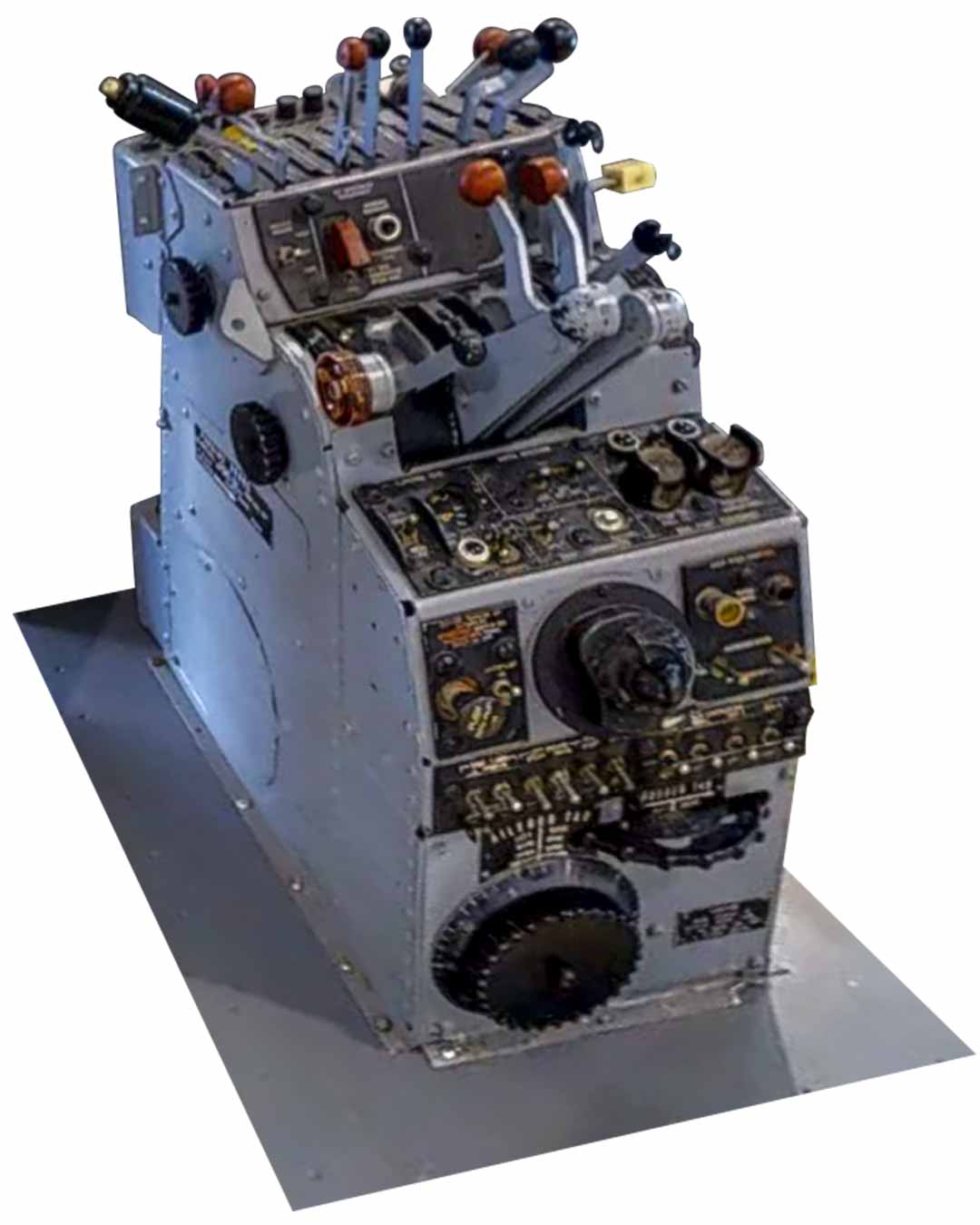 The P2V Neptune series of aircraft was one of the more successful post-war designs for America, with service that spanned decades for a handful of American-friendly countries. The system was designed by Lockheed Corporation from the outset as a land-based maritime patrol and reconnaissance platform. The system proved so versatile and effective, that the base production model spawned a large series of variants in specialized roles.

The P2V Neptune was a twin engine high-wing monoplane design. Sporting various Wright-brand powerplants throughout its production run, the aircraft featured outstanding range. A most identifiable feature being the single large rudder on the empennage, though the overall gangly design of the nose was another memorable feature. The Neptune split time between the United States Navy and the United States Air Force, though it is widely remembered for its service with the Navy branch.

The Neptune got its start as early as 1944, where two XP2V-1 prototypes are delivered with 15 production P2V-1 models. Initial models featured an impressive armament of cannons and heavy caliber machine guns of which 6 x 20mm cannons were mounted in a battery in the nose while 2 x 20mm cannon sat in a tail turret. 2 x 12.7mm machine guns are also part of the early arsenal though many of these weapons were later removed as needs for the platform changed. Internally, the Neptune was geared for military success with specialized equipment and anti-surface vessel weaponry. Chief among these weapons were the ability to carry torpedoes, mines, bombs of various weights and even externally-held high-explosive rockets (underwing).

Aircraft personnel amounted to ten in most versions. The P2V-2 was the first to do away with the nose turret armament, and instead, extended the nose assembly. The P2V-2S was an anti-submarine specialized variant while the P2V-2-2N was a cold weather derivative that was fielded with skis. The P2V-3 series brought about an early warning variant while the P2V-4 saw new and improved turbo-compound engines installed along with wingtip tanks and an APS-20 radar as standard. The P2V-5 was the first model offered up for export while the P2V-6 saw a revision to the series’ defensive armament. The P2V-7 proved to be the ultimate incarnation for the P2V series featuring the MAD boom installation in place of the rear tail turret. This variant proved to be the final production variant and saw many -5’s and -6’s brought up to this standard. Designation of the system was then changed to SP-2H after 1962.

The United States Air Force maintained the Neptune as the RB-69A while other designations existed for specialized Southeast Asia-operating systems. The Neptune was also license-produced in Japan. Over 75% of all produced Neptunes went into service with the United States Navy and would later be replaced by another Lockheed product – the P-3 – throughout the 1970’s. relegating the P2V series to supporting roles until complete withdrawal from active service.

One of the more well known Neptune aircraft remains the P2V-1 Neptune known as the “Truculent Turtle” which set a world’s distance record in 1946 by flying non-stop from Australia to Ohio (Columbus). The distance for this specially-modified aircraft covered some 11,236 miles.

Of particular interest is the use of the Lockheed P2V -5 and -7 aircraft (Type II Air Tankers), which were originally designed in the late 1940’s as a US Navy maritime patrol aircraft. Naturally, with older aircraft comes legitimate concerns of safety and reliability 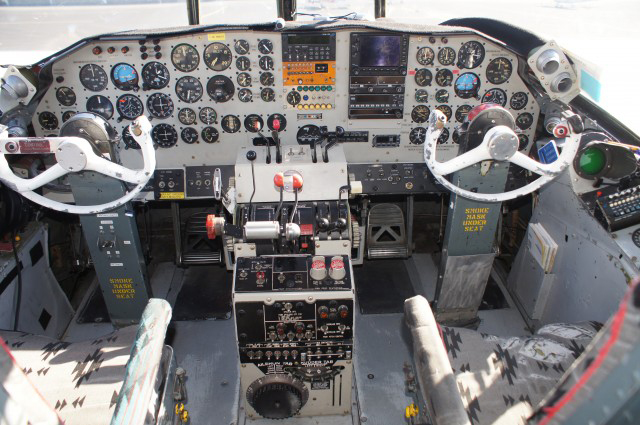 Neptune COO Dan Snyder relates that Neptune has stepped up its commitments to safety, having invested heavily in their aircraft by developing a industry-leading program for maintenance, inspection, and fatigue analysis for airframes and parts. The proof is in the pudding:  pilots speak with confidence about flying these aircraft in their chosen fire fighting missions.

The aircraft itself is an interesting beast. Primarily powered by a pair of Curtiss-Wright R-3350-32W reciprocating piston engines (generating about 2,900 HP each), it also (in the -5 versions and later) came with supplemental J34 turbojet engines. In the case of the Neptune aircraft, these are used only during high-thrust scenarios of takeoff and low-level runs for retardant drops. The result is a peculiar mix of thumping piston and screaming jet sounds from the same aircraft.

As for specific firefighting modifications, these aircraft are probably simpler than most might imagine. Neptune removes the primary bomb bay assembly and replaces it with a 2,000 gallon retardant tank and dump mechanisms which they custom build themselves. The entire system is inspected, tested, and certified for aviation use by federal air tanker officials. Other than those modifications, the plane looks and feels much like its 1950s heritage and could easy serve as a stand-in on any Cold War aviation museum set. 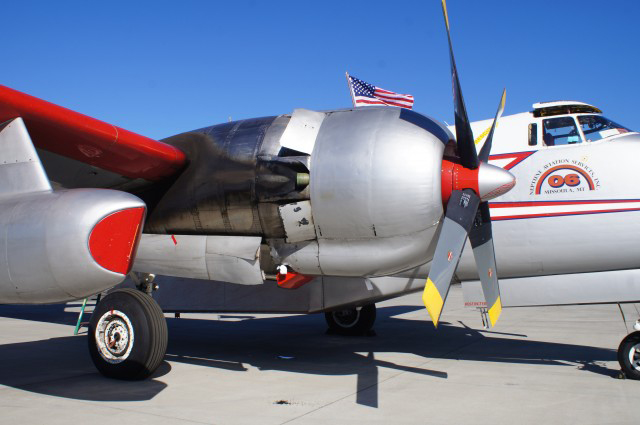 Consider the graceful strength of this old bird, and contemplate the sixty years of faithful service since her birth.  After appreciating the rugged electronics section of the flight deck, with its blocky, bold 50s-era typeface gracing every panel and warning label.

The engine cowling is clean and freshly painted, save for a bright, unpainted panel next to the exhaust. Here, the engines fiery breath menaced the polished metal with a permanent black, sooty tail that streaked down the engine pod and leapt across both upper and lower sections of the wing junction. Neptune knows better than to try and paint that panel. That blackened, heat-seared panel has likely looked that way for sixty years, and reminds that it is exactly how it should be. What a truly remarkable aircraft.