The History of Dodgers Baseball Aviation

Plenty of development was needed at Dodgertown when Walter O’Malley became Dodger President in October 1950. He began to invest in and make many improvements on the site, which had been abandoned as a World War II U.S. Naval Air base, adjacent to the Vero Beach Airport. When the Dodgers first acquired the property once used to house the young fliers, weeds were sprouting to eye level at the spartan barracks.

That same year, the Dodgers decided to find an airplane and a DC-3 was selected. How they acquired that plane may be part legend or the truth, as Harry R. “Bump” Holman, former pilot for the Dodgers, explains.

“They were looking for something that Branch Rickey could have a bed in,” said Holman. “About that time, the airlines were beginning to get rid of their DC-3s and move up to a bigger airplane. Eastern (Air Lines) had 60 DC-3s. My Dad (who was Eastern’s representative at Vero Beach) said, ‘Let’s not buy one. I think I can probably just win one in a crap game.’ Down in Miami, he was with (Eastern President) Eddie Rickenbacker. A lot of stuff went on in Miami that I wasn’t party to. The word was that they rolled the dice, double or nothing, for a DC-3 down there and my Dad won it.” 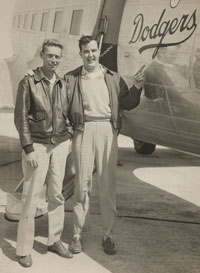 Holman explains that since most of the time the Dodger DC-3 airplane was parked and waiting to be flown following Spring Training, an experiment took place with a minor league affiliate which changed the course of history.

“After Spring Training, they hardly used the airplane during the ‘off-season,’ maybe once or twice,” said Holman. “In 1954, Dodger executives came to me and said pick one of these (minor league) ballclubs and go see if you can fly one for a season. See if the airplane is dependable enough, if we can overcome the weather problems and all the obstacles to see if we can fly a ballclub all year. So, we picked out the St. Paul (MN.) ballclub in the American Association. I flew them all that summer. We made all the games. We didn’t have any problems — no breakdowns, no mechanicals and no weather issues. So, the next year, they kind of branched out…we flew St. Paul all year and then they threw in the Ft. Worth (TX.) club. I flew St. Paul on every trip, but when they were staying at home, I’d run down and fly Ft. Worth and run them around for a couple of weeks. This was in 1954-56.”

By then, with the successful experiment complete, it was time for O’Malley and others to locate a larger airplane in which the Dodgers could travel on a regular season basis. The purchase of a twin-engine plane for more than $700,000 meant the Dodgers were the first team in baseball history to own their own airliner to transport the team.

“In 1957, they bought a Convair 440, brand new right from the factory,” said Holman. “It was like double the airplane. Twice as much horsepower and twice the seats — it had 44 seats in it. Eastern ordered 20 of them and O’Malley and my Dad got wind of it. They waited until (Eddie) Rickenbacker was down at the Convair factory in San Diego and they went out there the same time he was there and said up your order to 21. It was identical to the Eastern airplanes with the same interior.

“The only thing we did to that airplane was put an automatic pilot in it. Eastern didn’t believe in auto pilots. Of course, they flew short trips, little 30 minute trips. We had long ones, so I finally talked them into letting me put an auto pilot in it.

“It was painted with the same Eastern duck hawk on the tail. But, where their’s said, ‘Fly Eastern Airlines’ ours said, ‘Brooklyn Dodgers’ on the side. Where the round duck hawk was on the nose on the Eastern paint job, they put a baseball on there.

“As soon as we switched to the Convair, we jumped over to the Dodgers and flew them exclusively. I flew them on that plane during the seasons of 1957 to 1960.” 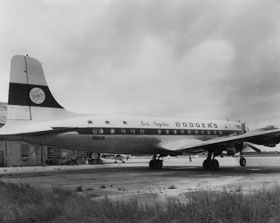 By 1960, The Dodgers wanted something faster, larger, and with four engines. They went to Lockheed to purchase an Electra II, but were reluctant to sell them the airplane saying it was too complicated to work on for an organization of their size. The Dodgers had a connection with Eastern Airways to assist with maintenance of the plane, so they purchased the Electra from Lockheed, but needed to wait a year for the plane to be built. In the meantime, they had sold the Convair and realized they did not have a plane for the upcoming season. The team found a used Douglas DC-6B, formally owned by Western Airways, to bridge the gap between the Convair and the Electra. The Electra went on to fly with the Dodgers until the 1970 season, when it was replaced with a Boeing 720.