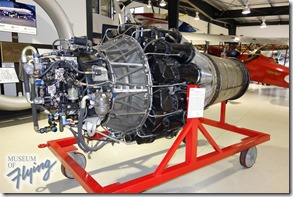 This engine is a direct descendent of the Whittle W I/2B series. General Electric improved upon this engine under the engineering team led by Donald F. Truly Warner in April 1942. Two of the first GE series I-A engines, developing 1,250 lbs. Thrust each powered the Bell XP-59 in October 1942.

First flight was June 1944, in an XP-80A. The production engine was designated J33 with GE building 300 before the program was transferred to Allison in Sept 1945.