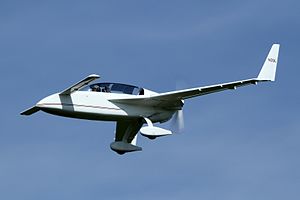 Burt Rutan began selling the plans to build his VariEze (‘very easy’) during summer 1976. Compared to nearly all other homebuilt designs, the VariEze was easier to build, yet it performed better, and cost much less, than the airplanes produced by Cessna, Beechcraft, or Piper. Propelled by a 100-horsepower engine, a VariEze, built to Rutan’s specifications, could carry two adults for about 1,127 km (700 miles) at approximately 290 kph (180 mph). Loaded light without a passenger and only an hour of fuel on board, most VariEzes could climb at 608 m (2,000 ft) per minute and reach altitudes near 7,600 m (25,000 ft). The VariEze had other important attributes besides performance that appealed to many individuals who wanted to build their own airplanes. The VariEze looked exotic and unusual but aside from the canard configuration, and the composite foam/fiberglass structure, the airplane was mechanically simple and orthodox. A builder with average mechanical skills could construct the aircraft quickly and inexpensively, and the airplane was economical to fly and maintain. Rutan sold more than 3,000 plan sets by the end of 1979 and by 1980, two hundred VariEzes were flying. In 1985, following a protracted lawsuit brought by the relatives of a passenger killed in the crash of a Long-EZ (another Rutan canard design), Rutan decided to stop selling plans for all Rutan airplanes.