The North American Navion was a civil aircraft designed after WWII marketed to the pilots returning from the war. The Navion was a modern postwar design made to compete with the Cessna 195 and Beechcraft Bonanza. Most modern post war planes offered a metal fuselage with more space and comfort, a more powerful engine, and retractable landing gear (as compared to the underpowered and smaller cloth aircraft, such as the Piper J-3 Cub). Often named the “poor man’s mustang”, the Navion used many similar design characteristics similar to the Mustang (most notably the tail’s design.) The design of the aircraft caught the attention of the Army Air Force, who ordered 83 of them, designated the L-17A, to be used as a liaison aircraft, personnel and 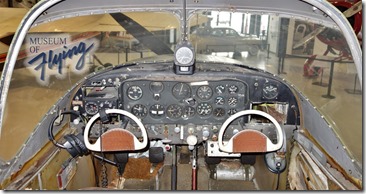 cargo carrier, and trainer for the university-based Reserve Officers Training Corps flight training program, 35 of which were later converted to L-17C standard by the Schweizer Aircraft Company by fitting them with L-17B model features such as an auxiliary fuel tank. North American built the first Navion in 1946 and sold the rights for the design to the Ryan Aeronautical Company in 1948. Ryan built over 1,200 Navions over the course of three years.

Our Navion was built by North American in Inglewood on January 10, 1947 as a NA-145 model. The Navion was powered by a Continental E185 series engine. It entered the service as soon as it was built and was retired on March 9th, 1956 when it was certified to fly for civilian use. This plane was flown privately until it was parked in 2006. The Museum acquired the Navion from the owner in 2013 and the plane underwent a restoration. The restoration of the exterior was completed in 2014 with the interior still undergoing restoration.