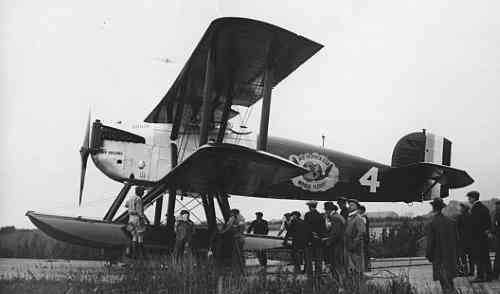 Following WWI intrepid airmen everywhere looked at the globe and considered the possibility of circumnavigating the earth in an airplane. The war had shown them how valuable it could be to span vast distances in a short amount of time.

Meanwhile in the small California coastal city of Santa Monica, the Douglas Aircraft Company had been supplying the Navy with a torpedo bomber named the DT-2. In 1923 the United States Army Air Service commissioned the Douglas Aircraft Company to design and build a plane for the first flight around the world. The goal was to evaluate the airplane as a global technology. Operating in extreme environments would test the airplane’s practicality and showcase America’s aeronautical industry. Connecting the world by air routes would foster better international relations and encourage commerce. And it would create popular support for the Army Air Service and its goal of expanding its role within the U.S. military. 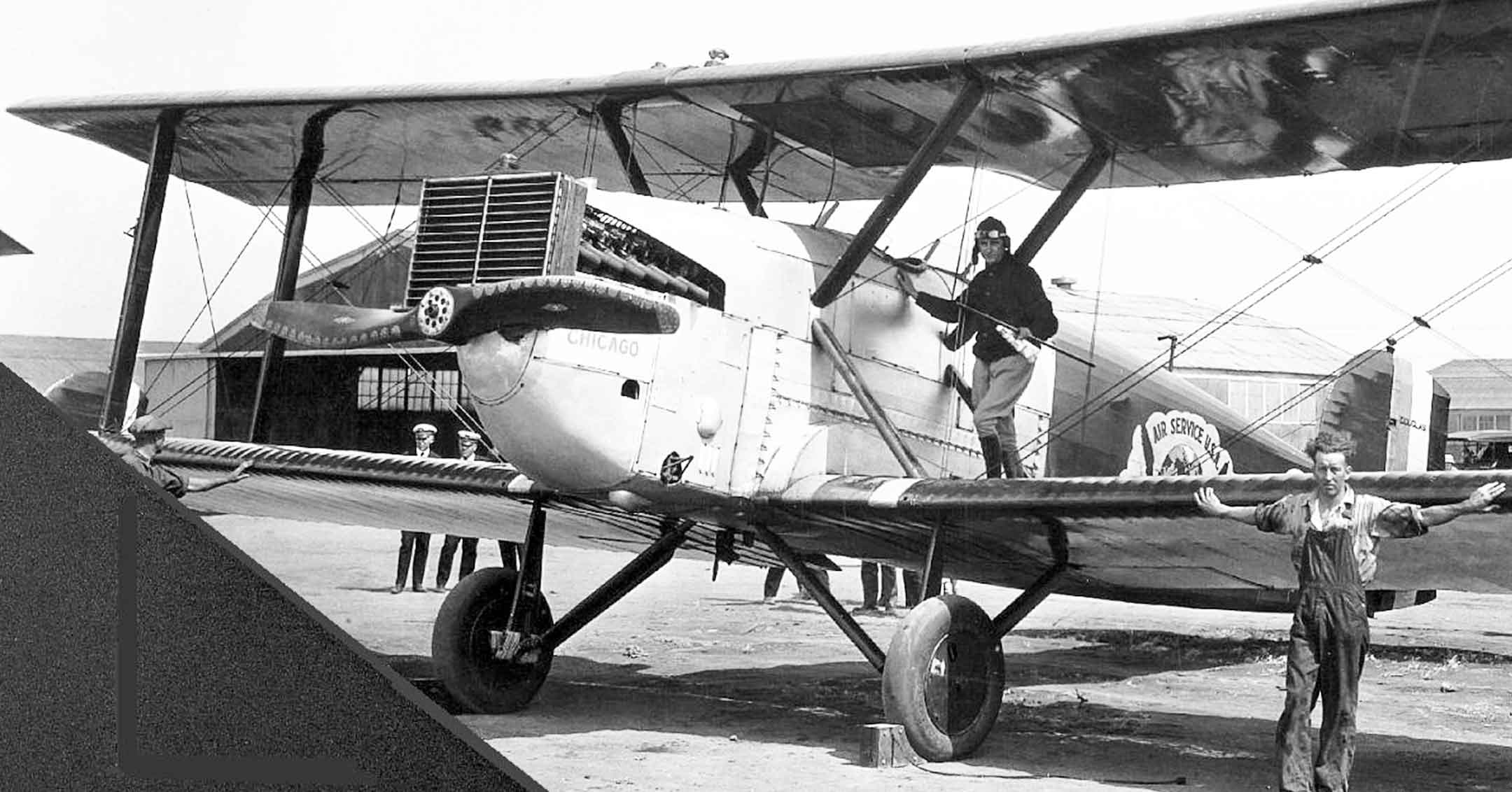 Using the DT-2 as a starting point, the Douglas Aircraft Company completely redesigned the fuel system to increase capacity from 115 gallons to 644 gallons for the new Douglas World Cruiser. Other changes included a vertical tail with extra bracing struts below and moving the pilot’s and flight mechanic’s cockpits closer together to improve communication between the two. The DWC retained the DT-2’s 420-horsepower Liberty V-12 engine, but two different-sized radiators were included, the larger one for use in the tropics. Finally, the DWC’s undercarriage was designed to be easily changed from wheels to floats for operations from land or sea.

By November 1923 the prototype, built in 45 days at a cost of $23,721, was delivered to the Army for evaluation . Soon after, Douglas received a contract for four production aircraft. 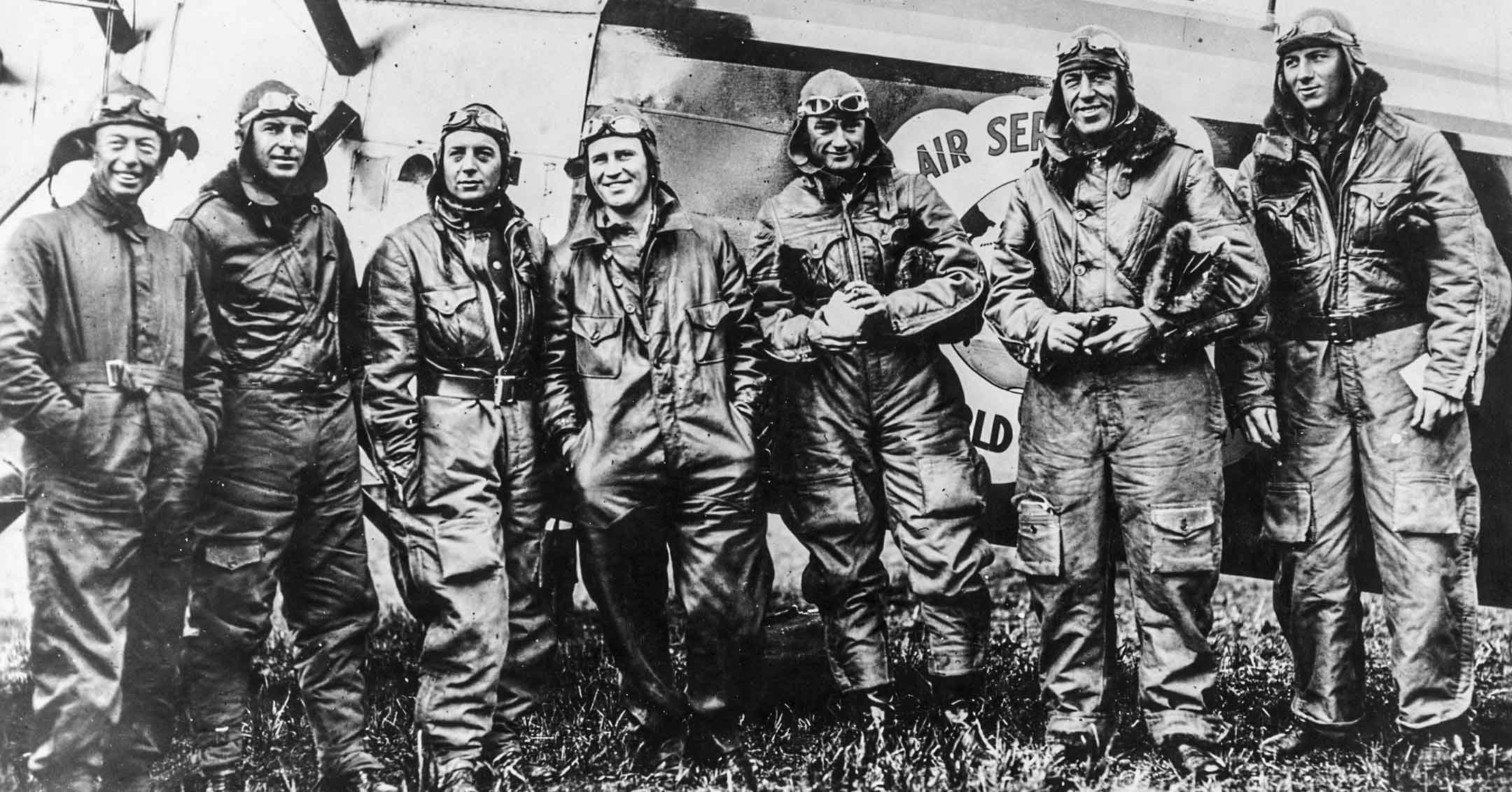 Some 175 days later, on September 28, three of the bi-planes and the six men aboard became the first to circumnavigate the earth by air. They had logged 27,553 miles (44,342 kilometers) in six months and six days, with an actual flying time of 371 hours. They had touched down in 28 countries and had crossed the Atlantic and Pacific Oceans.

Fog, blizzards, thunderstorms and sandstorms took their toll. While flying in dense fog, the “Seattle” crashed on an Alaskan mountainside. It was not replaced. The “Boston” was forced to land at sea and subsequently sank. It was replaced by a backup plane that had been built as a quintuplet to the four that began the flight. No serious injuries resulted from either accident, and the six crewmen continued on in the Boston II, Chicago, and New Orleans. 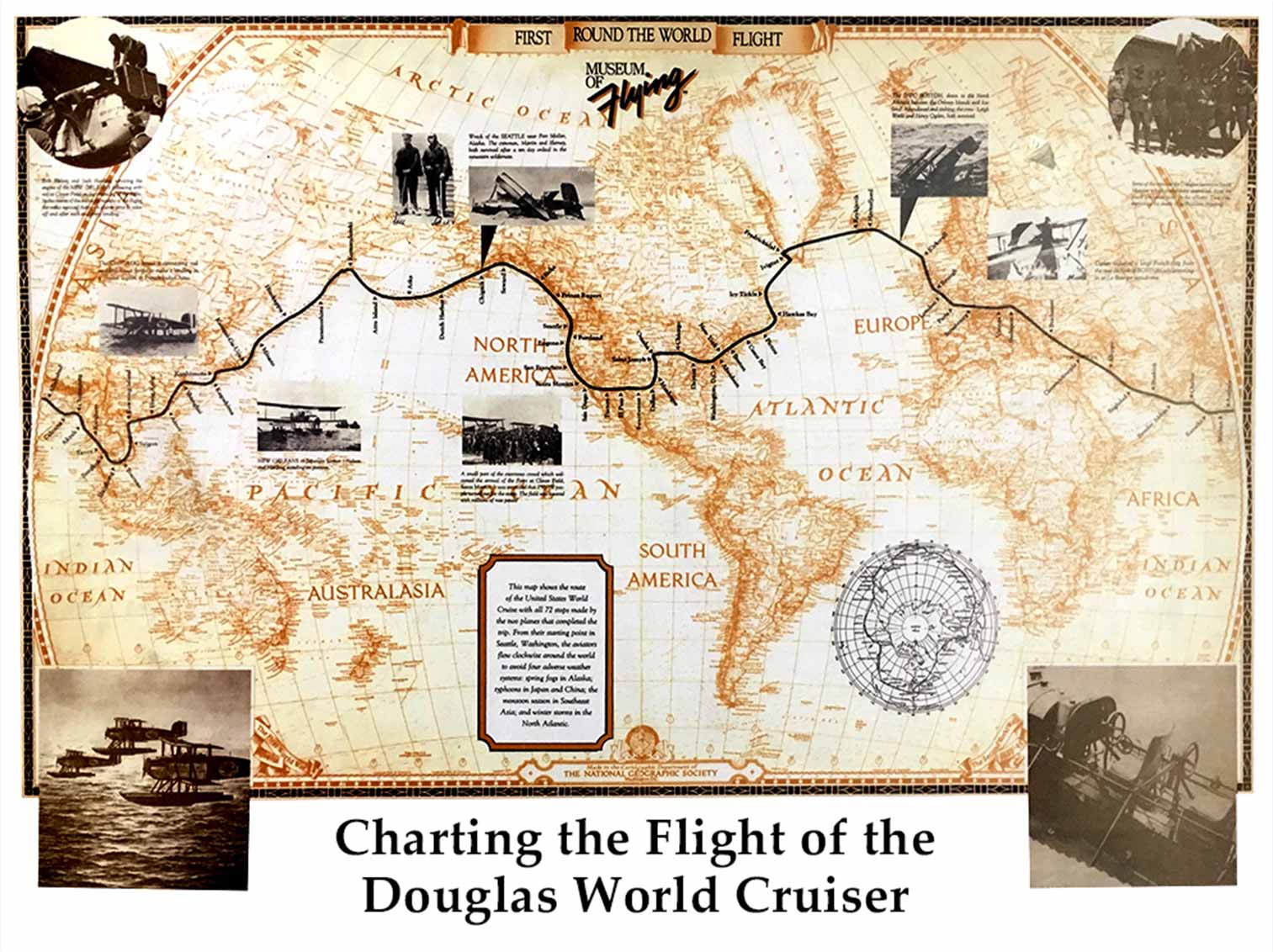 While other nations were competing to achieve the first world flight, the American success was largely a result of extensive planning. The cooperation of 28 countries along the flight path was enlisted. Stations were established to supply thousands of gallons of gasoline, oil, spare parts and other necessary supplies. The Army’s most qualified pilots and mechanics were recruited to participate in the effort. 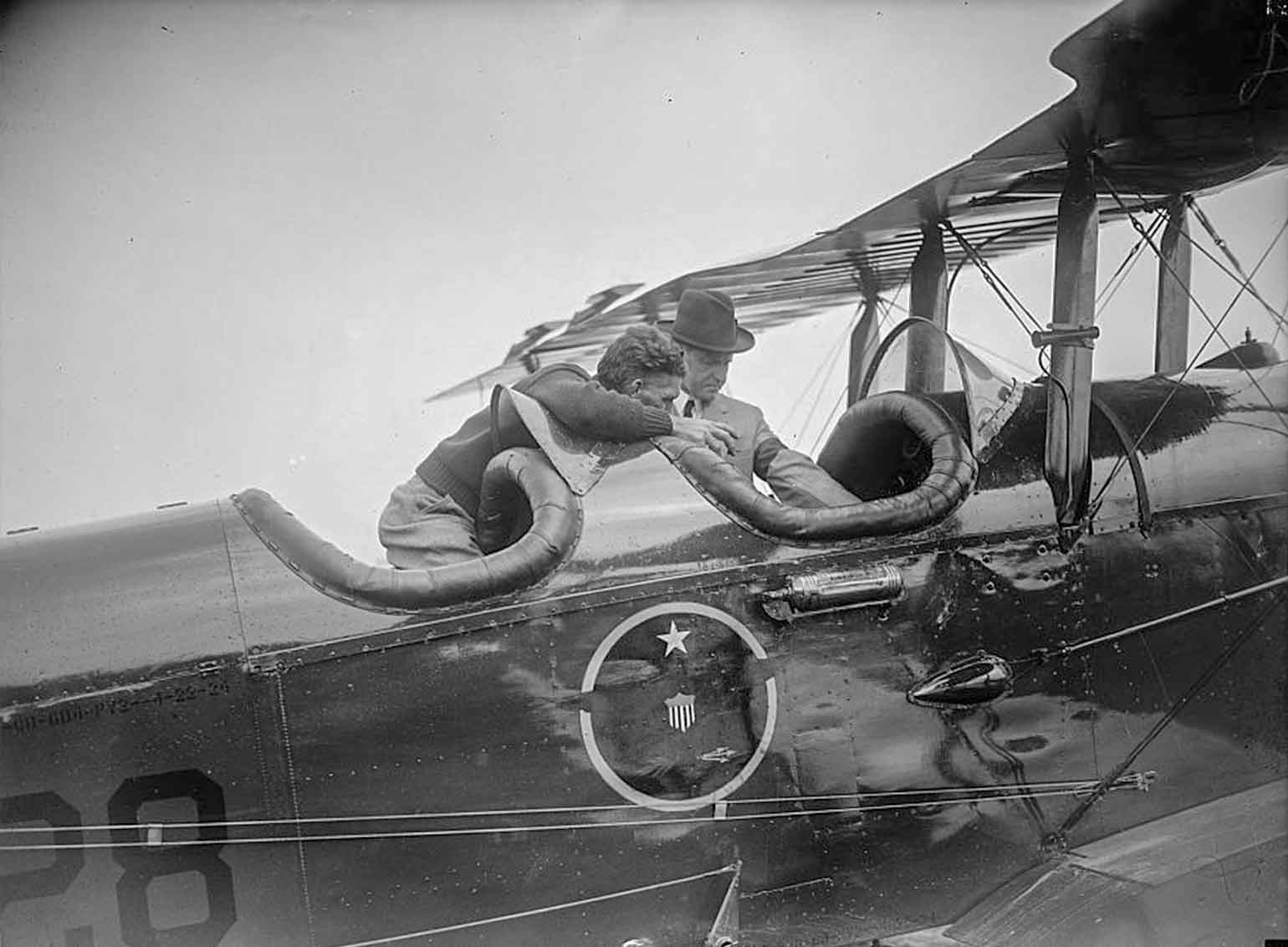 The men and airplanes participating in this flight are credited with one of aviation’s greatest achievements and earned the Douglas Aircraft Company its motto, “First Around the World.”Learn more about the first circumnavigation of the earth in the city where it all began…Visit the Museum of Flying in Santa Monica, California! 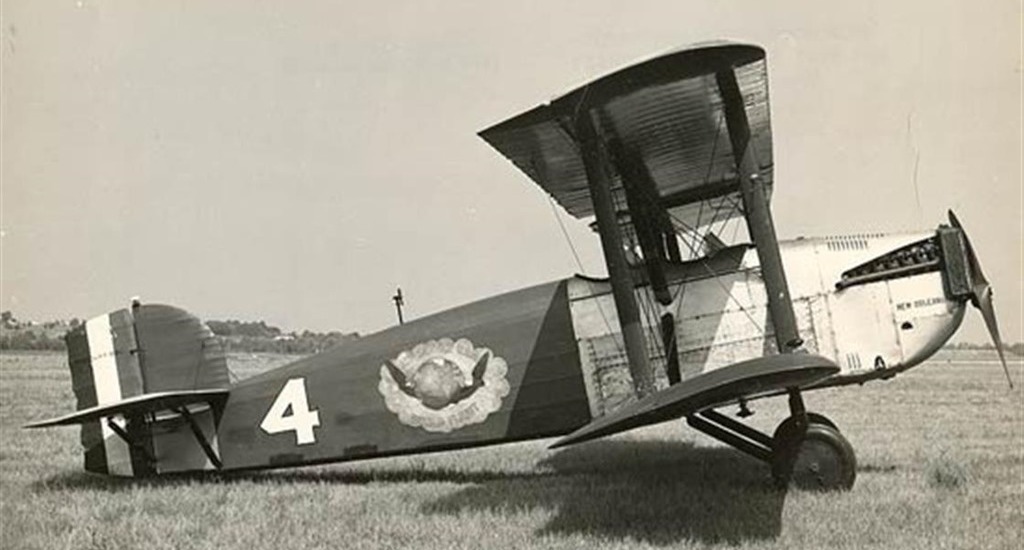