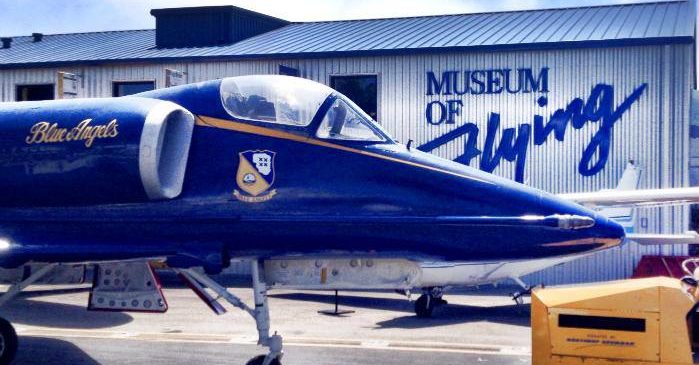 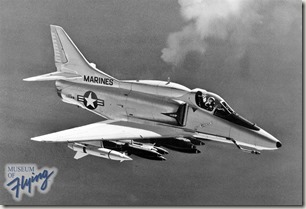 The Douglas A-4 Skyhawk is a compact, light-weight, carrier-capable ground-attack aircraft designed for the United States Navy and United States Marine Corps. The aircraft has a wing so compact that it does not need to be folded for carrier stowage. The aircraft’s five hardpoints support a variety of missiles, bombs and other munitions.

The A-4 is of conventional post-World War II design, with a low-mounted delta wing, tricycle undercarriage, and a single turbojet engine in the rear fuselage, with two air intakes on the fuselage sides. The tail has the horizontal stabilizer mounted above the fuselage.

The A-4 pioneered the concept of “buddy” air-to-air refueling. This allows the aircraft to supply others of the same type, eliminating the need of dedicated tanker aircraft. The A-4’s nimble performance also made it suitable for the Blue Angels demonstration team.

This aircraft was an A-4M variant and is on loan from the National Museum of Naval Aviation. The aircraft was modified to represent the Blue Angels by removing the avionics pod and camera bomb targeting system.