As the Museum of Flying approaches its 4th anniversary of re-opening, we’d like to take the opportunity to thank you for your support. We’ve come a long way since we reopened our doors back in February of 2012. At the end of the month, on February 27th and 28th, the Museum will celebrate our 4th anniversary with $4 admission (free for active members), and special guests such as Rob “Skid” Rowe, Chief Test Pilot for the Lockheed Martin U-2, and many more presentations through the weekend. The schedule for events is as follows:

10:30 AM – U-2 Chief Test Pilot Skid Rowe will give a presentation on the U-2, a single jet engine, ultra-high altitude reconnaissance aircraft operated by the United States Air Force and previously flown by the Central Intelligence Agency. It provides day and night, very high-altitude (70,000 feet), all-weather intelligence gathering.

1:30 PM – Aviation artist, author, and historian Mike Machat will give a presentation on the history of The Douglas Aircraft Company. Douglas was an American aerospace manufacturer based in Southern California. During the 1930’s, 40’s, and 50’s, Douglas was the largest manufacturer of commercial airliners. 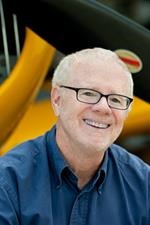 Throughout both days, there will be activities for children too!